skip to main | skip to sidebar

Nineteen young Yukon carvers made history by creating a 30-foot red cedar dugout canoe. Under the leadership of Tlingit Master Carver Wayne Price, the carvers went on a journey of discovery.

An island on the east side of the Yukon River became their home for the next two months as went go back on the land to learn the traditional techniques for carving a dugout canoe.

The camp started June 5th. On the first Saturday, a 13,000 pound red cedar log from Terrace B.C. was lifted onto a raft using a crane and grapple truck and floated across the river. Over the course of the next 2 days, the log was gradually winched up the bank, with the carvers pulling hard to help the mechanical winches.

The carvers’ journey included an 8-week commitment to being drug and alcohol free, participating in talking circles and sweatlodges, learning from Yukon Elders, and giving up their IPods, computer games and cell phones.

The camp ended, and the carvers paddled the canoe out on August 19th. Friends and family were singing traditional songs on shore as they arrived.

The finished dugout canoe was gifted to the Kwanlin Dun First Nation for display at the new Cultural Centre on the Whitehorse waterfront. The gifting occured on September 30th, 2009 as part of the historic groundbreaking ceremony for the Kwanlin Dun Cultural CentreThe carvers will have access to use the canoe for local and international canoe journeys in future.

The project was initially planned around 12 youth carvers but 19 carvers committed to the process.

Log
-was 36 foot red cedar log chosen by Wayne and Whitehorse artist Brian Walker in Terrace BC
- delays occurred (needed exemption on export permit to move it to Yukon)
- mud slide on Stewart Cassiar another delay
- but the log made it here!

Filming
-Allan Code, Robin Armour and others are working on a documentary about the project

Elders’ visits
Elders Paddy Jim, Emma Shorty, Matthew Tom, Martha VanHeel and Ann Henry have spent time at the camp. Other Elders are encouraged to come and share their stories and time with the youth. 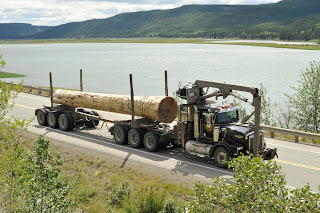 The log on it's way to Whitehorse in early June
Posted by Yukon Canoe Project 2009 at 2:23 PM

Flipping The Log - Photos courtesy of Robin Armour Photography
FOR MORE GREAT PICTURES, CHECK OUT THE POSTS BELOW!